25th, Jan, 2018
Remstar’s Crusaders stumbled to their second defeat of the season as the Sherdils took home 11 comfortable points to sit pretty in second position. It’s not been the best of starts for the retired Dota player as he and his team are struggling to find the momentum needed to get through an entire season.

The Sherdils took the lead with 6 points, winning both the mobile and console titles and the pressure was on the Crusaders to try and redeem themselves. Here’s how things panned out.

The walls are breached – Crusaders take the win on cbble

The Sherdils dropped Falken for the second game in a row and suffered once more as their side was unable to take down the Crusaders. With the map pick turning out to be an uncommon one, it was Krissh and Kav1sh who led the charge for the Crusaders. Crusaders were missing Rex, the most successful player of 2017 in their squad but still managed to edge out the Sherdils as we saw Kav1sh drop a huge 30 bomb to get his team 5 points. And with that the Sherdils still are unable to win in CS:GO, despite having a captain who has been a top player for the country.

In a bizarre turn of events, Remstar chose to bench himself for the Dota match, a decision that would come back to haunt them as we would soon find out. The Crusaders looked a bit lost in the draft, picking up a lineup that had a bit of everything. However their line up was a tad bit greedy, with 4 heroes requiring farm to be of use. Meanwhile, the Sherdils opted for single target control in the form of the Doom, Nyx and Shadow Shaman. It was a close game with Invincible’s Invoker carrying the Crusaders on his shoulders for the most part, but in the end, his PA and LC weren’t able to give him the support required as the Sherdils had a much easier line up to execute. In the end,  Remstars absence was felt both in terms of leadership and on the carry position and will be something that they will need to address in the future. 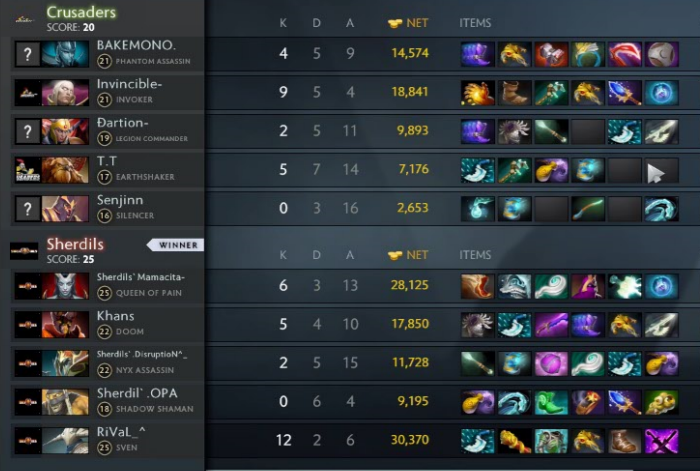 With that, the Sherdils pick up 11 points while the Crusaders get only 5. With this Remstar’s team sits at the bottom of the table while the Sherdils move to second place, 4 points behind the Marksmen.