Local team Signify surprised everyone with a 2-0 performance in Group A, to take top seed and move into the playoffs. Joining them will be Exclamation Mark, while Funn1k’s Aachen City Esports went 0-2 and have been eliminated from the competition.

In Group B, DeToNator stood tall claiming first place, while Tigers will also move on to the playoffs. The Indian + Filipino mix stack of Entity Gaming were eliminated as a result. 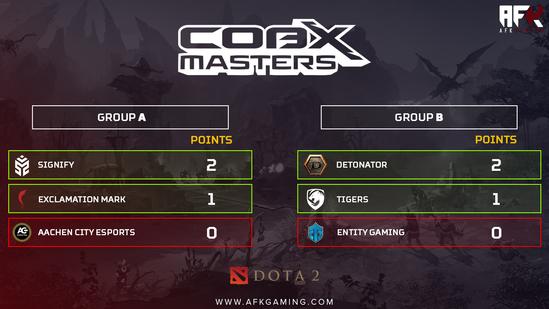 The day was marred with massive delays and technical glitches which meant that only 2 games of Dota were played on the stage, of which one match had to be replayed to maintain the integrity of play. It was a disappointing experience, to say the least, and we hope that the issues are resolved before the playoffs take place. The presence of international talent and names like Dendi, while exciting, cannot be justified for what was ultimately a massive letdown for the entire community.

However, Signify’s performance does make a convincing case for the Indian side, who take on heavyweights, Tigers in a crucial bo3. We are hopeful that the situation does improve by tomorrow for what promises to be an entertaining affair. On the other side, DTN will be taking on Exclamation Mark for a spot in the grand finals.

Both of Signify’s wins were rather convincing, which should be great for their morale as they take on the Tigers tomorrow. For Tigers, the morale feels low as they were knocked out of the Dotapit Minor qualifiers earlier today, whilst also slipping up versus DTN in the groups. They will need to be on point and use the experience of names like Dendi, 1437 and Raven to take them into the finals.

DeToNator are also looking like favourites for the title as they blew away the competition in fairly one-sided games. Massive performances from Benhur in both games, assured the team safe passage into the semifinals, where they now face a team who on paper will be the underdogs.

Stay tuned for all the action and coverage from the COBX Masters ….