Clash Of The Titans

31st, May, 2016
Beyond Infinity and Invisible Wings went up against each other in the Havoked LAN finals organized by Mag Gaming in Havok Nation, Pune yesterday. There was no doubt that these two teams were head and shoulders above the rest and they proved so as they obliterated all competition and reached the grand finals to set up a date with each other.
Both reached the winner bracket finals with relative ease despite the ruthless bo1 format and this time it was IW who were triumphant sending their rivals to the lower bracket. Raunak “Crowley” Sen was on fire on his Tinker and proceeded to dominate BI ending the game with 17 kills and 17 assists. While the game was an hour long and BI did have the late game Spectre, the farm advantage on IW was too much and with their Void Chronosphere setup they ended up taking the game.
IW fought their way through the lower bracket finals against Roar eSports from Hyderabad and while the game was closely contested, Roar’s Lone Druid missed his Radiance timing by quite a bit and this meant that BI were always in the driver’s seat. Balaji “Blizzard” Ramnarayan boasted a 800+ gpm on his Sven and carried the game for BI. A very unconventional clockwerk pickup for BI enabled them to catch out Roar’s Tinker multiple times. This just goes to show how top tier teams learn from their mistakes and have the versatility to counter it as well.
The grand finals was a bo3 and though it was late into the night both teams were up for it. It was Invisible Wings’s first appearance at a major LAN ever since they signed Archmage from POC and they would want to show how much of a force they truly are after a quite few weeks. For BI it was a chance at redemption after having been dropped down to the lower brackets.

Invisible Wings surprised us all with a Tiny+Io pickup, something we haven’t seen Indian teams do. While this combo does fare well on paper against their opponents choice of mid, Templar Assassin, it meant that their lanes were a little weaker. Sven had to go up against Dark Seer, not a very comfortable lane for the number 1 position while their offlane NS was having a tough time down at bot against The Ember and WD dual lane.

First Blood. Constant harass from the Dark Seer is keeping Sven at low HP and Doom patiently waits near the side shop and ganks him. Both the Lion and the NS are there but can only watch as Sven falls. BI are having a much better time as BlizzarD’s signature Ember also joins in on the action. The Witch doctor cask completely destroys the Io and Tiny and Ember is there to pick up a kill. IW will have to take consolation in the fact that they had stacks for the Tiny and he is farming well.

While Dire are using their Relocate as much as they can, BI are finding return kills everytime. Meanwhile Swifty on the TA has farmed his way up to the top of the networth charts and completes up his Desolator. BI utilize a smoke to find a kill on Sven in bot and immediately move into the pit. Aegis is secured for TA as well as a Blink Dagger. With the safety of the Aegis and the pushing power of the Desolator, BI make quick work of the Dire T2’s and look to go for raxes.

The first attempt is thwarted by IW as the Relocate comes in on the WD and the Doom is wasted on Sven. But with the farm advantage and the kill advantage, BI regroup and go down mid, this time with more caution as mid raxes fall. IW try to defend with all their might but are taken down one after the other as Tiny even dies back. BI close the game out and a flawless showing from Swifty who just could not be killed.

The Tiny Io combination looked good and Evil-Ash had a good performance on the Io
but the overall execution was a bit lacking. The offlane NS was also pretty much useless in teamfights until he picked up his Aghs and by then BI had a sizeable lead to work with. Better execution from BI helps them secure game 1. 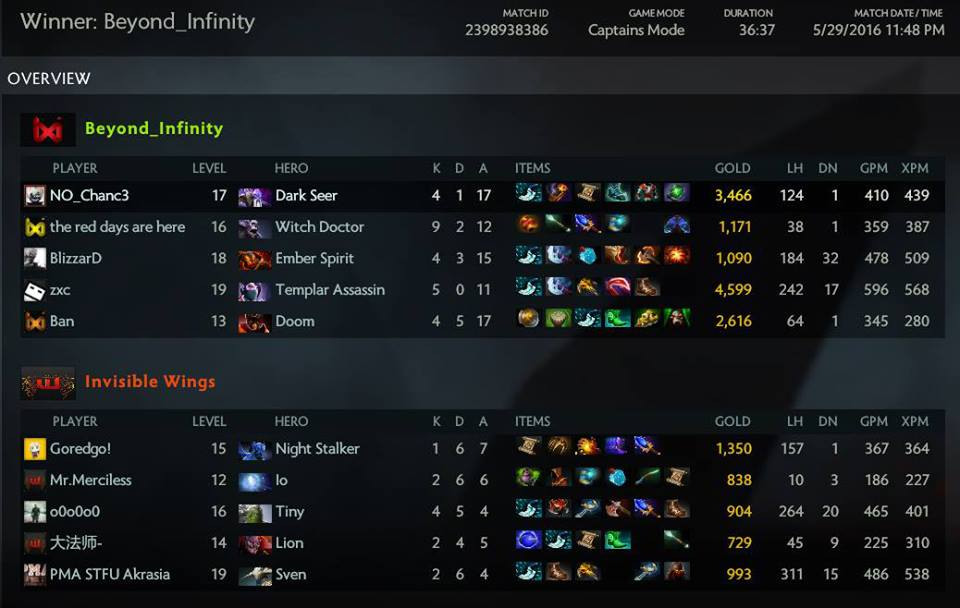 Both teams opt for a heavy AOE wombo combo lineup this time around as its IW who pick up the WD along with a Phoenix, Juggernaut and an offlane Tide. Crowley is on his signature QOP up against Swifty’s Death Prophet. Up on the Dire, Disruptor, Lich, Void and Gyro are picked up, and this means barring the Gyro and to some extent the Lich 8 out of 10 heroes are heavily dependent on their ultimates. The Lich XP factor will come into play as reaching level 6 will be crucial for both sides.

Both Gyro and Jugg start on the hardlanes but Tide is having a harder time as he is taken down twice. Not an easy lane for sure but safelane Tide is not working out as planned. QOP also is losing in terms of CS despite getting a kill on the DP. Interesting to note that Gyro has gone for the greedy Helm build despite the AOE heavy lineup he is up against. IW are finding some good kills but aren’t able to convert them into pushes.

20 mins into the game and IW are 5 man pushing the bot tier 1. BI want to defend but get jumped on by the Tide as the ravage setup helps secure 3 kills. The networth charts are lead by Juggernaut and the QOP and more gold comes their way as they exchange the top tier 2 for their bot tier 2. Not a really good exchange considering they are ahead, but with ravage on cd they can’t be looking to engage.  QOP has added a BKB on top of her Orchid just 22 mins in. Another big teamfight for IW as they capitalize on the Exorcism being on CD and engage on the Gyro farming ancient stacks. BI try to put up a fight, but lose 4 quickly as the QOP gets a triplekill.

BI are struggling as Void falls below the 4 position Phoenix in terms of networth. Even the DP just has a Euls to show for her efforts. IW are leading 18-9 at this point. But  IW get greedy as Crowley jumps aggressively to get a kill on the Gyro. A chrono is expended and BI get 4 including the Juggernaut. With no Ravage to back them up IW look vulnerable for the first time. Invisible Wings were definitely shaken by that encounter and the game moves on to a passive farm fest with both teams unwilling to make a move.

Invisible Wings are falling apart as they break their smoke just to go for a courier and with their positions reveled, BI jump and though the chrono is whiffed, it’s a 5 man wipe from them. Rosh is taken quickly after and items are pouring in for the Dire as Disruptor picks up an Aghs and now has the AOE doom to work with.
Shocking from IW as they  blow a smoke again and find nothing but then take a fight after it expires. They have completely lost the plot as QOP blinks onto the highground and into the Static Storm and falls without getting anything off. 3 more IW members fall quickly after. Beyond Infinity waste no time and go for the top raxes . Juggernaut buys back but is brought down after getting caught in the Chrono. Tidehunter is simply a spectator as his Ravage is on cd. QOP respawns and is brought down again after being unable to bring down the tanky DP with her Shivas,Octarine and BKB. Top raxes fall as well as DP also falls finally but Beyond Infinity have taken an almost unsurmountable lead.

It’s all but over now. IW decide to catch out BI who were doing Roshan. They kill off the Void with the hex on QOP but the Ravage hits no one. BI have the farm and the tankability to take the fight and FV buys back and IW lose 4. With no buybacks GG is called and Beyond Infinity take the first place with a clean 2-0 sweep. 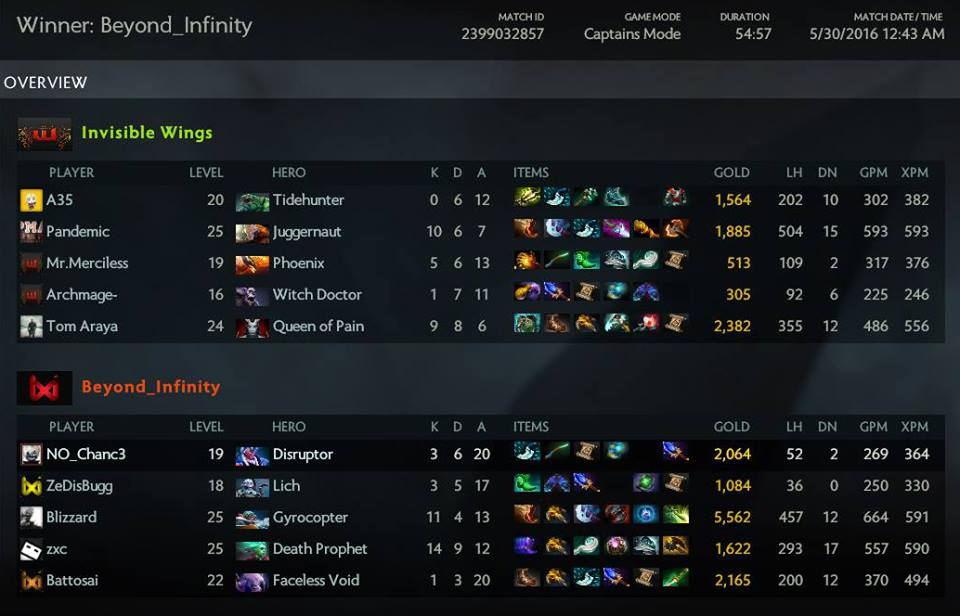