ESL India made an announcement stating that the organization will be conducting an investigation of all the 20 players that took part in the ESL India Premiership Fall Season Finale.

Following what took place at the ZOWIE eXTREMESLAND - Asia Finals, ESL India has begun investigating the drives used by the players at the tournament in order to check for any potential cheating.

Upon immediate inspection, they discovered the same cheat program used by Forsaken in Shanghai, on the SSD that he used on the day of the event and have forwarded this evidence onto the Esports Integrity Coalition (ESIC).

ESL is recognizing this act as a Level 4 offence under the Code of Conduct followed by ESIC.

Ian Smith - the ESIC commisioner is conducting an independent investigation and is expected to deliver his verdict soon.

So what are the repercussions of a Level 4 Offence?

According to the ESIC - Code of Conduct:

A 1st time offence entails: A fine of up to 100% of Match and/or Event Prize money (or equivalent) and/or between 4 and 8 Suspension Points and/or a fixed term of suspension from the Game and/or Event/s of up to 24 months

It should be noted that Forsaken has previously been suspended for 6 months with a previous offence.
Product Head of the ESL India Premiership Aditya Shah elaborated on the situation via a comment on ESL India's post. 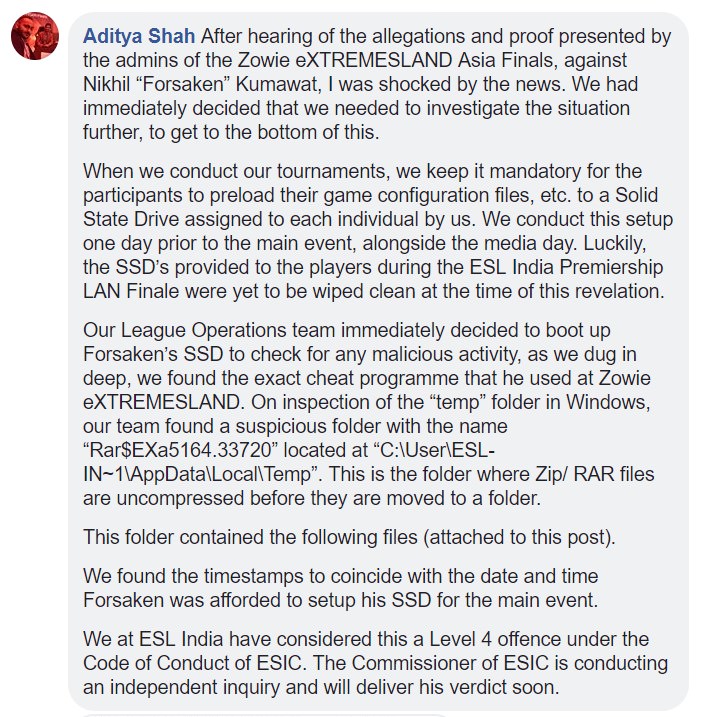 See also : In conversation with the Commissioner of the Esports Integrity Coalition - Ian Smith
About UsContact UsServicesRSS
DisclaimerAdvertise With UsArchiveEditorial Team