In an announcement made by BTRG Gaming via Weibo, the organization which had disbanded its roster after a poor finish at the Asian Development League, has revealed that Kristjan ‘fejtZ’ Allsaar and Erik ‘truth’ Hansen have joined the organization as a part of their new line-up.

The post on Weibo also dismissed all rumours connecting the organization with Adam ‘friberg’ Friberg, currently playing for Heroic.

FejtZ is familiar with the Chinese CS:GO scene, having had an opportunity to play for UYA and 5Power Gaming in 2017. Since then he has been shifting from one team to the other, even standing-in for HellRaisers for about 3 months during which he participated in IEM Shanghai 2018. 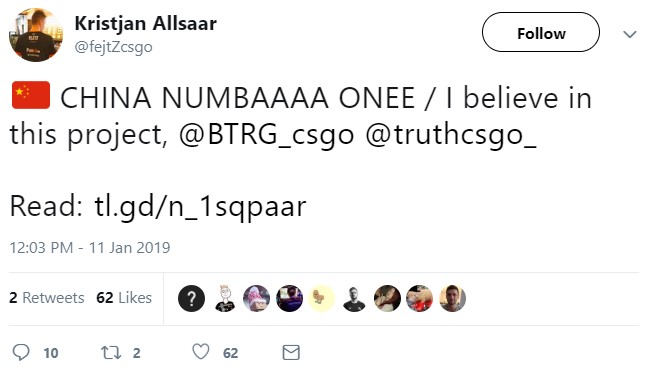 Truth, on the other hand, has mostly played CS:GO in the Norwegian region with teams like BX3 Esports Club and Kingpins Esports, with a small stint with a UK based organization called Vexed Gaming. This will be his first time playing away from the European region. 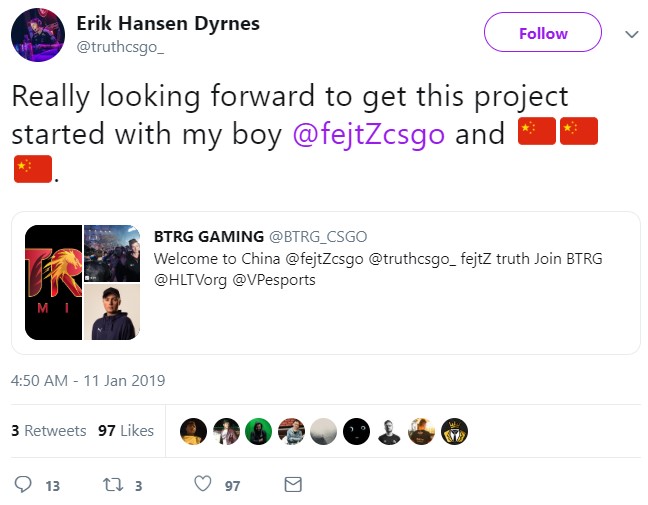 Fejtz and Truth have a good understanding while playing together, they have both played alongside each other previously at the PLG Grand Slam 2018. The two were in a team called Guccigang, which qualified for PLG Grand Slam 2018 through the African qualifier and later with ECL.gg (Guccigang was sponsored by them for the event), managing to reach the Quarterfinals at the Main Event.

The addition of foreign players will surely bolster the BTRG roster. It might not be able to take down teams like  Tyloo, MVP PK or GOSU but they can cause an upset within the Asian region.

Both the players have good international experience and also share good chemistry amongst themselves.

The India CS:GO circuit has already seen the benefits of involving foreign talents within their line-ups, it was a huge success for ex-OpTic India to have Yb as their IGL and Signify CS:GO has also shown potential to be a really great team with the presence of foreign players. Hope BTRG can pull something similar.

The current BTRG line-up is as follows: