Beyond turn tides as B.O.O.T-d[S] drop their first game in the Asian Development League

The Asian Development League which is well into the first week of its Main Event has finally witnessed some success dawn upon Beyond Esports.

Beyond Esports had been on a losing spree since the start of the Main Event until yesterday. They had lost to GOSU, CyberZen & Ehome on the first two days of the Main Event before their luck finally turned for the better against Flash Gaming.

This is how the matches proceeded on 26th & 27th October, 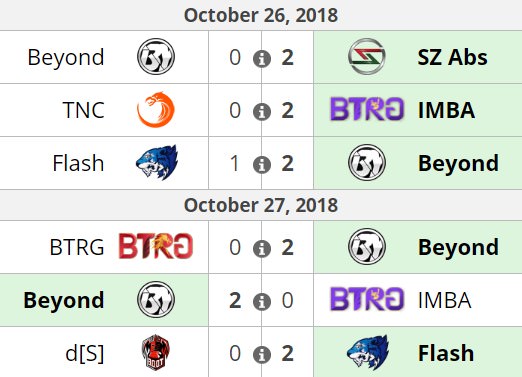 Beyond Esports vs SZ Absolute

Beyond Esports were still down in the gutter when it came to team chemistry and proper gameplay as they lost their fourth match in a row, this time to the frags of SZ Absolute.

SZ dominated Beyond by taking them down on Mirage and Cache with scores of ‘16-6’ & ‘16-5’, respectively. The single-handed beat down was a really disappointing performance by Beyond who just can’t figure out how to break free from this downward spiral.

BTRG.IMBA took their second win in a row as they beat TNC who were on a lookout for a win after losing to SZ Absolute yesterday.

The first match between the two teams took place on Inferno. It went down to an overtime after the two teams spent the first 30 rounds involved in some intense breakneck action. The overtime went the way of BTRG.IMBA who clutched out the winning round by running a perfect decoy, winning by a score of ‘19-17’.

The next match was played on Cache where BTRG.IMBA played a controlled game that helped them overwhelm their opponents and take control of the match early on leading them to a ‘16-7’ victory over TNC.

Beyond Esports vs Flash Gaming

Beyond took down Flash on Mirage with a score of ‘16-13’. Beyond came back into the League with a crazy first half that witnessed them stomp all over Flash. Although Flash threatened a comeback in the second half it was well covered by Beyond.

Flash came back with a win on Dust 2 with the scoreboard reading ‘16-12’. It wasn’t a clean win for the Chinese team as they struggled throughout but Beyond made quite a lot of mistakes playing T-sided which cost them the match.

The decider was played on Train where the first half observed heavy competition from both sides with Flash coming out on top with a score of ‘8-7’. Beyond played the best CS they have till now in the whole league as they bested Flash with a final score of ‘16-12’, registering their first win since the start of the Main Event.

Beyond Esports finding its rhythm in the match against Flash Gaming went on to beat BTRG with a series score of ‘2-0’.

Beyond faced some competition in its first match on Mirage but they came out on top winning some crucial rounds during the start of the second half. Beyond beat BTRG with a score of ‘16-11’.

The second match was a straight up stampede as Beyond stomped past BTRG on Nuke winning the match with the scoreboard reading ‘16-3’.

Beyond had a busy day playing back-to-back BO3 series but going forward with its new-found momentum they won against BTRG.IMBA as well.

Winning both the matches with a similar score of ‘16-13’ on Cache and Mirage. Beyond stuck to their early aggressive rushes followed by the oddball decoy fake that they had successfully deployed in the past as well. Every chance taken by Beyond Esports played right on the money resulting in the second win of the day for them.

B.O.O.T-d[S] went down in its first match of the Main Event against Flash Gaming.

Both the matches witnessed the two teams fighting really hard for the victory but it was Flash that came out on top as the victors in both these occasions. The two teams fought it out on Overpass followed by Train, hailing victorious by a score of ‘16-14’ and ‘16-12’, respectively.

B.O.O.T-d[S] were a little shaky towards the start of the first match but recovered well to give their best but it all fell short today, as Flash outplayed them in all departments.

This is all the action that took place so far within the Asian Development League – Main Event.

Stay tuned as we bring you all the updates from the last set of matches to be played out tomorrow, before the first week of the Main Event comes to an end.?

The matches are being streamed in