Are Signify truly unbeatable in India?

The Master league of the ESL India Premiership 2018 - Fall Season came to a close after an action-packed 3 Months which featured 12 teams, 58 Matches, and lots and lots of Dota. And now we've hit the calm before the storm.

A lull period between the end of regular play and the beginning of the LAN Finale which affords us the opportunity to take a look back at the season that just went by.


The Top 4 teams headed into the Fall Season Finale

Signify and their streak at Indian Tournaments

Much like last season, we had a clear separation at the top this time as well with Signify, Alpha Gaming, and ROG Titans being in a completely different tier in comparison to the rest of the teams in the Master league.

Signify finished the Master League in the first place, after an undefeated season with 11 straight wins. BlizzarD, Sw1fty, and Crowley have been on fire and are currently occupying the 1st, 2nd and 3rd positions in the KDA charts for this season with a whopping 13.50, 11.21, and 10.38 KDA respectively.

Signify's dominance over the Indian field in the past year is unprecedented. The fact is that the team hasn't lost a single Indian LAN/Qualifier since inception as a premier Indian team. A look through their list of achievements provides a clearer look at how dominant they've been.

The fact that they've only lost to two Indian teams in their history is quite astonishing and is a rarity over the course of Indian esports history. Dominant, All-Star Indian teams of the past like Error Gaming, 3GP, Oblique Gaming, Beyond Infinity (Team Elunes), Invisible Wings, and Entity Gaming have occasionally lost a few tournaments during their era. But Signify seems to be an exception to this norm. They've only ever dropped a single series in Indian tournament playoffs (A BO1 Loss to Aggressive 5 in the ESL India Premiership 2018 - Fall Season Finale).

It makes intuitive sense that teams capable of such lengthy runs would feature considerable season-to-season roster continuity. Theoretically, such a characteristic should permit players to execute their team’s strategies in a fashion that would minimize the sort of sloppiness in team-coordination that could cost a team an occasional series.

But Signify has undergone several roster shuffles in this time-period, yet they've never really lost their footing in any Indian LAN. Perhaps it could be this frequent roster shuffling, which in turn brings in new ideas whilst simultaneously weakening other Indian teams, that has played a key role in their long-term success. Or maybe it's just that the org knows how to bring out the best in a set of talented players.

Whatever the reason for their success is it is undeniable that this winning streak inherently suggests a remarkable degree of consistency. They are currently playing in the Taiwan Excellence Gaming Cup 2018 - Qualifiers, where they're also unlikely to lose.

However, their shot at a 4th ESL India Premiership Title in a row when they compete in the Fall Season Finale might not be so straightforward.

Closely behind them is the Filipino team, Alpha Gaming who only dropped a single game throughout the duration of the season (to Signify). They beat all of the other teams in the Master League quite convincingly to secure their berth in the LAN Finale. A matchup between the two teams in a LAN setting should be a cracking series.

But will the Filipino team travel to India and compete in the LAN event?

(Read: ESL India Premiership 2018 - A critical look at the format and potential problems)

While Signify has had much success in India, they are yet to pull off any truly noteworthy performances on the international stage. Their next opportunity to change this comes at the main event of the PvP Esports Championship due to take place in Singapore between the 5th and 7th of October. However, this means that squad will likely have to forfeit their slot at the main event of Dew Arena 2.0 which takes place on the same dates - a small price to pay for a shot at international glory.

ROG Titans looked solid in the Master League this season, only dropping two games, and finishing the season with 9 wins. The team consistently feels like it's just on the brink of becoming a Top tier Indian team, but a lack of results in clutch situations seems to be their biggest roadblock.

Reckoning Esports round out the Top 4 teams who have qualified for the ESL India Premiership 2018 - Fall Season Finale. While they haven’t really played like the rest of the teams in the Top 4, they have put in a fair amount of good showings to warrant a spot in the LAN Finale.

Bangladeshi team: The Council, Nepalese team: Akatsuki, VIBE, and Cullies are the four teams who have been relegated from the Master League.

The Council nearly managed to claw their way out of the relegation zone but were ultimately relegated thanks to the narrowest of margins. Unknown Cartels will definitely need to improve their performance by a massive margin in order to not get relegated in the next season. Especially considering the teams that are currently competing in the Challengers League. 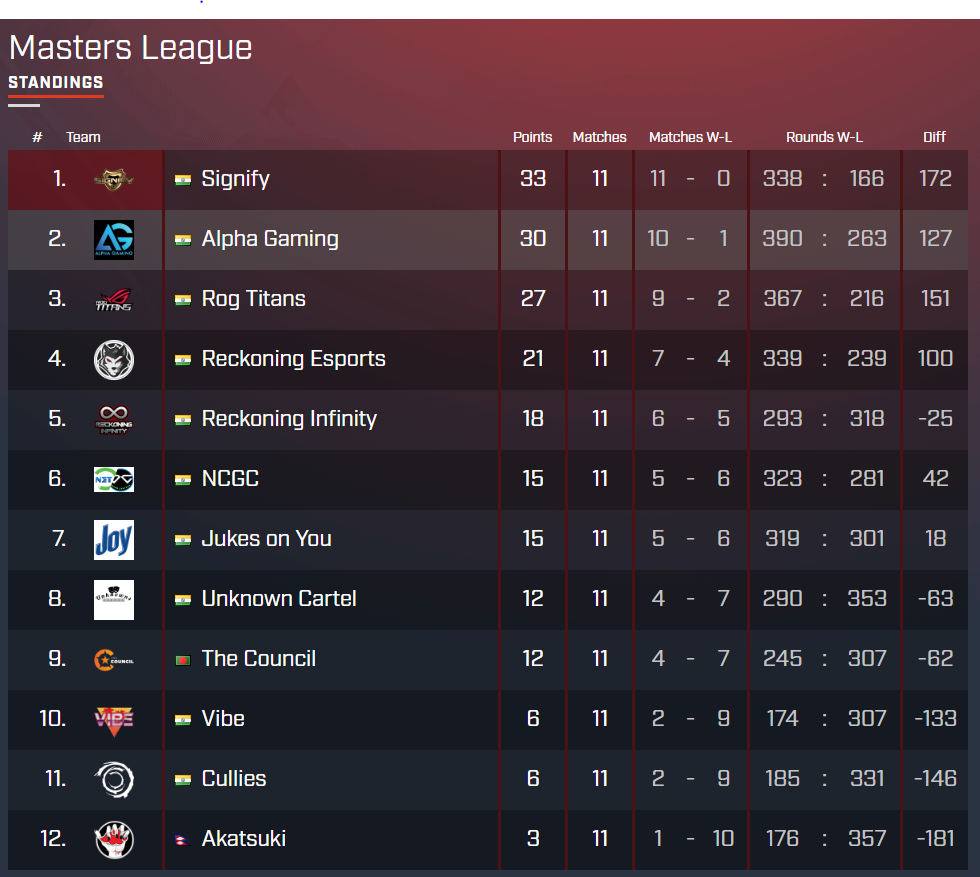 The top four teams from Dota 2 and CS:GO in the Master League of the ESL India Premiership 2018 - Fall Season will be competing with each other for a combined prize pool of ?20 Lakh at The Fall Season Finale in Hyderabad on 13th and 14th October!.