ClouDx : Hi Acrid, please introduce yourself for our readers

ClouDx : Tell us a little about your E-Sports career. Where did you begin? What teams did you play for? Tournaments won etc.

Acrid : Alright, I started Dota back in 2008. Initially I used to play on LAN with cafe mates, there we made a team called SDD ( Sex Drugs and Dota) and then we played few local tournaments in Mumbai. Didn't win any.
Then again we made a new team called Die BytcH and we qualified for the 1st ever Imba Gamers in Hyderabad and we got kicked out in 1st round by Error

. After that Punk called me and told me he is making a new team with Phobia, Everest and Buddha and he wanted me to join. So I started practicing daily with phobia and Everest. One day phobia called me up and said let's make our own team.. so Dico and Becks came into the scene and we formed 3gp which was later renamed to Roccat.RoG.
We won a lot of tournaments had great few years. Then I took a break and started playing Dota 2 for fun and made a comeback with Voetsek.. that didn't go too well after which I joined back with my old team mates Baccha (Crowley), Ketan (Evil Ash) and Puneet (Prophecy) in OG. 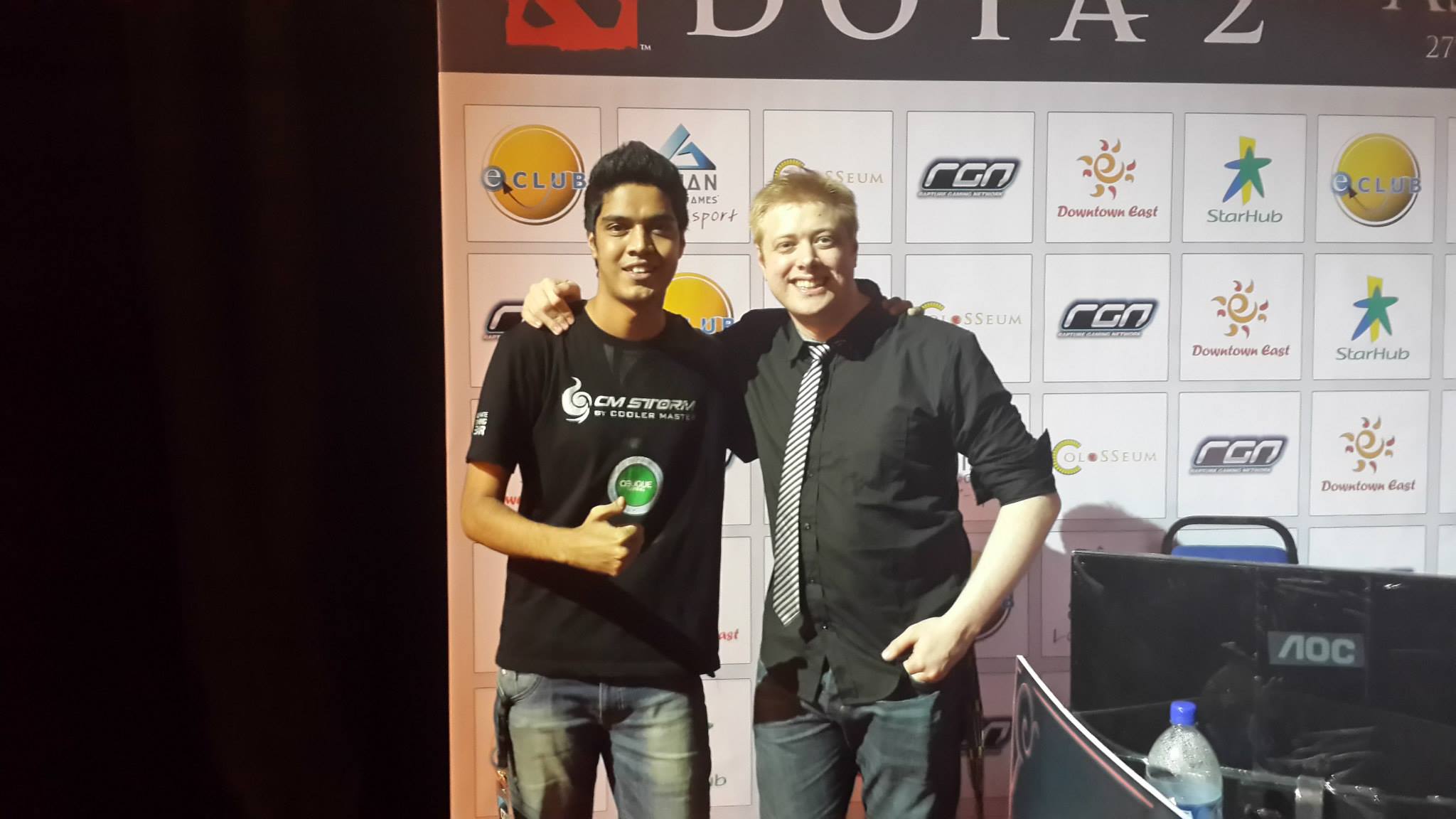 Acrid with Tobi Wan at The Asian Cyber Games 2013

ClouDx : Out of all these teams, which would you say was your most enjoyable one and why?

Acrid : Undoubtedly the most enjoyable team was Roccat.RoG, consisting of Dico, Phobia, Everest, Puneet, Ketan, Baccha,Becks and myself. I enjoyed a lot playing with them. We used to travel a lot for tournaments in RoG days and our sponsor Saurabh from Roccat is a pretty cool person.

ClouDx : Free2Play #3 saw Oblique Gaming lose their dominating streak to NeckBREAK eSports. What was the team's morale and mindset before and after the final match?

Acrid : We were not prepared for Free2Play #3 and Ketan at very last moment couldn't come to Bangalore, so we had to take a sub at very last moment.. so everything was kind of a mess. But still we were like we can take it. We tried hard but failed to win the last game.

ClouDx : As a former member of one of India's top teams and a long time member of the Indian Dota 2 community, what (in your opinion) needs to change for Indian teams to make a mark on an international level?

Acrid : Only thing that we need is dedication, passion and love towards the game rest is 2ez... just practice, practice n practice. And I'm pretty sure my team Oblique Gaming will dominate the scene and 2015 will be their year in international scene.

ClouDx : Do you still play Dota? How do you spend your time now that you have no training obligations?

Acrid : I don't play Dota much.. maybe a game or 2 in week. I started working.. joined my family business. Partying a lot and gym that's it!

ClouDx : If you could turn back time, what would you change in your Dota career and why?

Acrid : Nothing. I had a great run and met amazing people and I don't wanna change anything cause everything just went perfect

ClouDx : The feels T_T. Do you plan to make a comeback anytime in the near future?

Acrid : No dude, I suck at Dota now. I'm just gonna support and cheer for my team mates and hope they do well.

ClouDx : Has playing Dota helped you in any way for your other career ambitions?

Acrid : Nope it didn't help in any way. Only thing that I got from Dota is friends and it was more than enough what I got from a computer game. 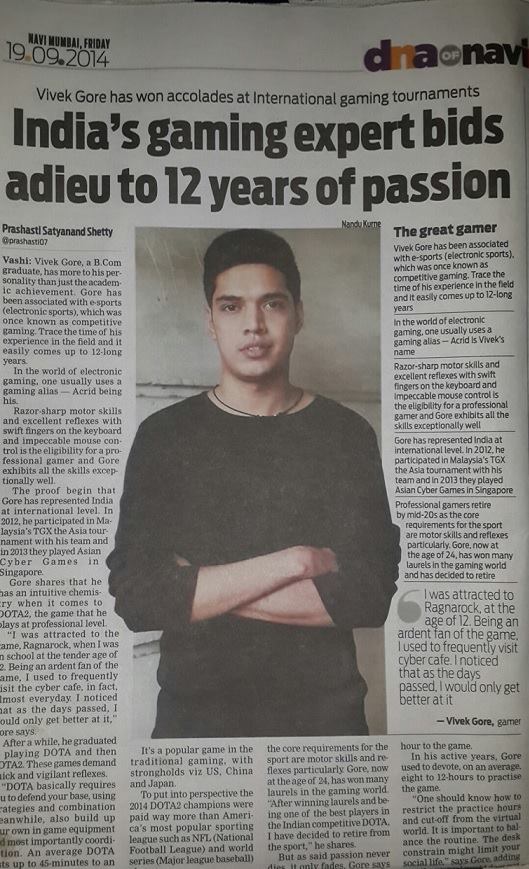 Acrid's Retirement even made it to the newspapers!

ClouDx : What are the best and worst moments of your Dota career?

Acrid : The best moment was when we won ICGC season 2, it was an epic comeback and worst part was when Everest decided to quit Dota.

ClouDx : Who do you consider to be the top 5 players in the Indian Dota 2 scene today?

ClouDx : Your advice for players and teams looking to make a career out of E-Sports in India?

Acrid : My advice would be if you can't make it on top within 1 or 2 years better concentrate on your studies or whatever you're doing. Already Indian scene is not so big and if you can't be #1 in India, then you should probably just keep it as a hobby.

ClouDx : That's all I've got Acrid. Thanks a bunch for your time! Any shout-outs before we wrap up?

Acrid : This might be my last shout out in Dota scene so I dont want to miss anyone :D. Here we go. Shout out to Phobia, Mr.Everest, Becks, Dico, Baccha, Prophecy, Ketan, PulseofHell, Rishabh, Atul, Punky, Noddy for rollin

, Saurabh from Roccat, Sashank from CoolerMaster and special shoutout to Brotherhood 7 love you ma niggas

Shoutout to AFK Gaming for doing great work for Dota scene in India and Shout out to Nishant's mum for making bread pizzas!

ClouDx : Cheers and all the best with life Acrid. AFK Gaming will miss casting your matches! We hope to see you around