The Grand Finals between Alpha Red and TNC for the WESG 2018 –SEA Finals took place today at the Quill Convention Center in Kuala Lumpur.

The two teams faced off against each other in a BO3 series where Alpha Red played their hearts out to win the finals by a series score of ‘2-1'.

This is how the game between the two finalists unfolded: 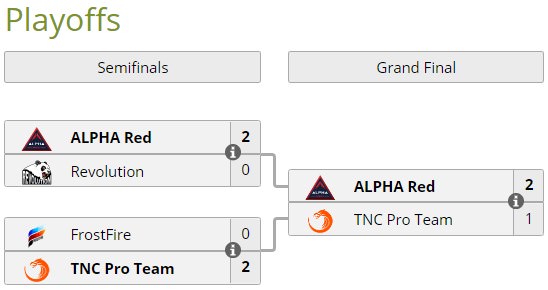 Alpha Survives A Thriller Against TNC

The first match between the two sides took place on Inferno where both the teams displayed heavy aggression, trading rounds evenly amongst them which resulted in an overtime that went the way of TNC who went one up in the series.

Alpha Red replied immediately by going neck-to-neck against TNC on Nuke. Although under tremendous pressure, Alpha Red kept trying out some quirky setups that helped them get an edge over TNC in another overtime situation that successfully went the way of the Thai squad.

Mirage witnessed the decider taking place as Alpha after attaining a really good start went on to corner TNC giving nothing away and took them down with a score of ‘16-9’, winning the SEA Finals.

With this, Alpha Red won the WESG 2018 - SEA Finals along with a cash prize of $7,500 followed by TNC winning $4,500 and finally Revolution and FrostFire both getting a sum of $1,500 each, as all the four teams qualify onto the World Finals.