The first day of WESG 2018 – SEA Finals came to an end after multiple BO1 matches were played in the group stage. It is quite a unique way of playing a swiss format group stage which is surely a bit confusing but despite that, the matches were truly fun and exciting.

All doubts regarding the Swiss Format - Group Stage was cleared by the WESG committee through the following post,

This is how the point table looks after the end of the first day: 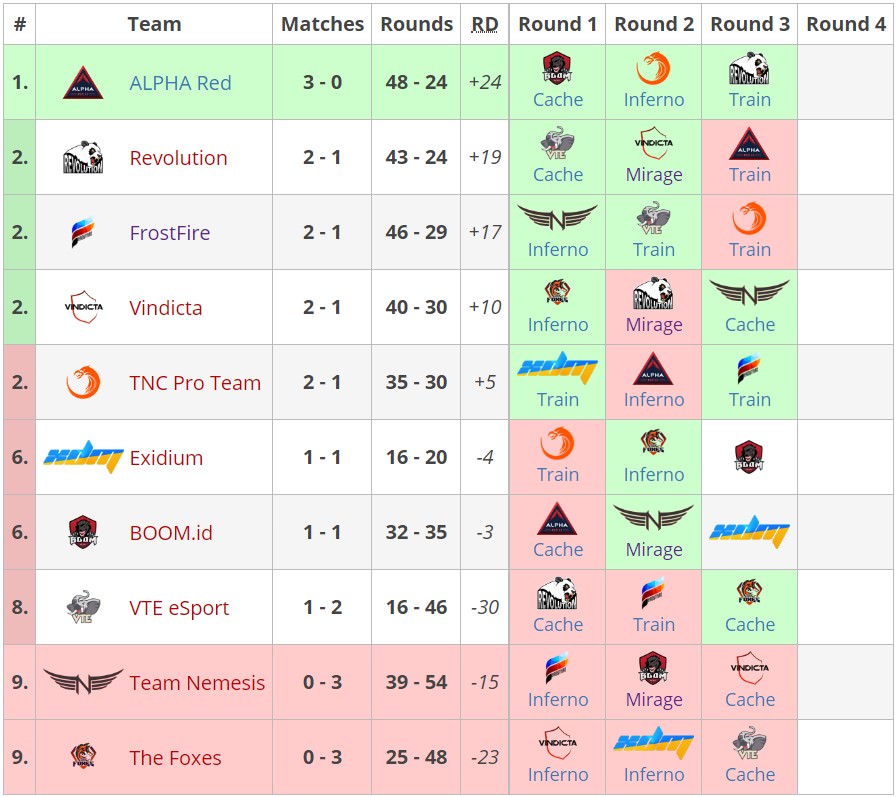 ALPHA Red representing Thailand has been the most successful team yet, winning all their three encounters against BOOM.id, TNC and Revolution with scores of ‘16-10’, ‘16-3’ and ‘16-11’, respectively. The team has shown consistent performance featuring great teamwork and a very level-headed playstyle which makes their opponents think a lot, leading to misreading the situation, panic and blunder.

The Vietnamese team, Revolution is looking really strong putting up some great performances against VTE eSport, Vindicta and Alpha Red. Although the team were not able to subdue the table leaders, they destroyed VTE eSport on Cache by a score of ‘16-0’ while dominating Vindicta by a score of ‘16-8’ on Mirage as well.

FrostFire, TNC and Vindicta are going at an even pace with a series score of ‘2-1’. Tomorrow's matches will play a big role in deciding which of them can make it past the group stage.

BOOM.id and Exidium have had their match postponed until tomorrow. The match will be really important to stay in contention for a spot in the Playoffs as both the teams are going ‘1-1’ till now. The match was postponed because a huge delay was observed due to some technical problems that arose at the venue.

Team Nemesis and The Foxes are the two teams that are definitely not going to make it to the Playoffs, losing out on all their match-ups going ‘0-3’ into the second day of the event.

Stay tuned as a lot of decider match-ups are lined up to take place tomorrow along with the semifinal matches within the Playoffs.