4o, Aug, 2017
The Group stage of TI7 is almost at its halfway point, and I have to say wow, what a digital storm it’s been so far. The first day of TI7 Group Stages ended with the two LGD teams standing undefeated in their respective groups. After the second day, the standings changed a fair bit, with LGD dropping a few matches which Team Liquid fully capitalized leapfrogging them and moving to the first place of Group 1, while LFY still stands undefeated atop the Group B table. 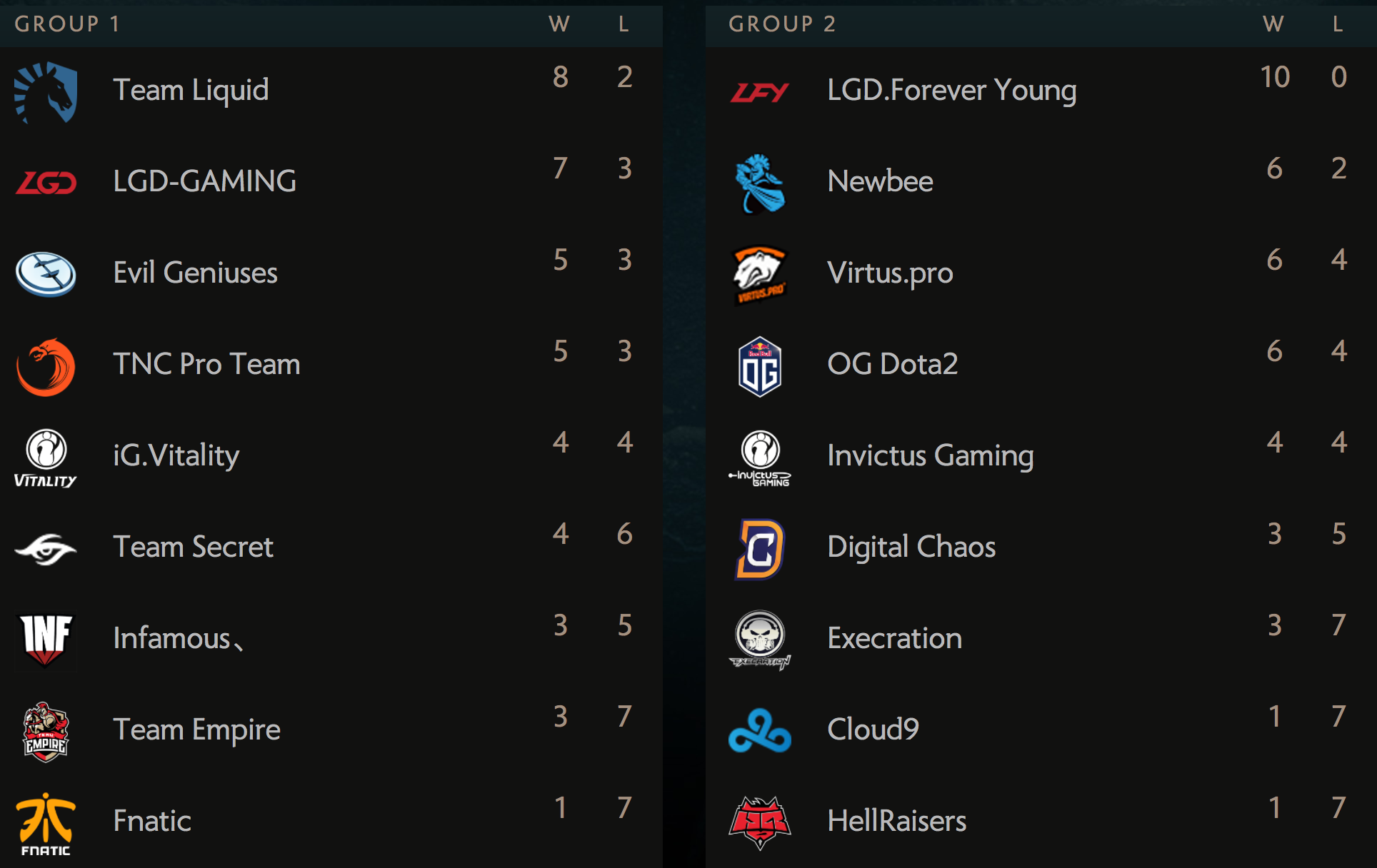 EG picked up their slack from Day 1 and are now sitting at a respectable 3rd place in the Group 1 table after emphatically beating Empire (2-0) in their only series of the day. IG Vitality too had a resurgence of form after their poor Day 1, beating the then group leaders LGD 2-0, surprising many. There were no other surprises on Day 2. Liquid beat Infamous in a 2-0 stomp setting up the stage for the final game of the day against LGD to be a clash of the Titans.

If Liquid managed to take 1 game off LGD, they would finish Day 2 at the top of the table.

They picked up a cheese lineup that was drafted around a Miracle Monkey King of all heroes (Coincidentally, Miracle has played 10 different heroes in 10 games. Versatile is an understatement). They also picked up a BroodMother for Matumbaman. The experiment proved to be a disaster of the highest order as they got dumpstered by a spectacular Queen of Pain (Maybe) backed up by a Sven (Ame).

But Liquid managed to turn it around in Game 2 with an incredibly mobile lineup featuring a Matumbaman Lycan and a Miracle Ember Spirit. LGD’s Faceless Void and Axe were just not able control the Liquid squad and hence they got dropped to the second place in the group.

There weren’t really any huge surprises in Group 2. The top 4 teams are pretty much what we expected when the group was announced; the two Kiev Major finalists (OG,VP), The most consistent Chinese team across the season (Newbee) and the runners up of the most recent premier tournament(MDL) before TI7 (LFY). What is surprising is the fact that LFY are currently sitting at the top with a 10-0 record and Cloud9 sitting in the bottom with an abysmal 1-7 win-loss ratio, with their only win coming against a demoralized VP team coming fresh off a 15-minute loss to LFY.

That said Cloud9 has faced all the top 4 sides of Group 2 and will now play against the lower placed teams of Group 2 including Execration, HellRaisers and Digital Chaos all of whom have been underwhelming in the group stages.

We also saw Ana prove the haters wrong by putting in one of the best performances in a carry role in OG’s game 2 against VP. As a Morphling, he was the lone OG hero in the Top 5 of the networth chart. We also saw Notail set a record for most deaths in a TI game by dying a baffling 20 times. But, in the end it was all for naught as VP prevailed in the 67-minute slugfest with a near flawless performance from RAMZEES666 who ended the series with an unbelievable KDA of 18.00

Now let’s take a look at how our SEA teams fared on Day 2.

Following their 3-1 day one, TNC kept going strong once again on day two. While it’s sad that they didn’t manage to 2-0 Team Secret, as Game 1 was a game that they definitely should have won with the lead they had built up. At least they got a point out of it.

Following that match, they had to play against fellow mid-table team, Team Empire. Game 1 was a relatively straight victory for TNC with Empire being unable to deal with the superfarmed Kuku Razer and Raven Sven.

Game 2 was anything but that. After Empire took all three racks following a huge teamfight victory, TNC prolonged the game two outcome up to 79 minutes by defending against mega creeps for about 15 minutes with a six slotted Naga Siren and Kuku’s Queen of Pain. However despite their best effort which included a Kuku Rampage! TNC was unable to hold out against Mega Creeps and ended up losing.

Poor Fnatic. I’m certain that this tournament will provide them with some great experience and even great memories, if only they manage to NOT get discouraged by the thrashing they go through most of the time. Their win-loss record is 1-7, after all.

Still, for fairness’ sake, they did tie their only series of the day against Infamous, the first ever South American team to attend The International. Both games were highly entertaining, with Fnatic debuting the first Monkey King of the tournament and winning Game 1.

Game 2 was, without a doubt, the most action packed game of TI7 so far, there were so many moments. Words cannot do justice to this game, go on and catch the highlights here.

Execration's second day in the Group Stage was quite good, to be honest. With a 1-3 record after day one, they were in a big slump entering into day two. Losing to Newbee, while a little bit saddening, wasn’t entirely unexpected at this point, however, the points they got against IG and HellRaisers (1-1 in both games) has been a breath of fresh air for the Pinoy Squad. If they can continue the trend on day three, they might be able to secure themselves a decent finish. Of course, they will have to play Cloud9 and DC, two very winnable games. They need to try to win them both in order to solidify their standing.