The ESL India Premiership 2018- Summer LAN Finale kicks off on 23rd June at the Dublin Square, Phoenix Market City, Kurla. The event features many of India’s best teams and will provide for several intriguing matches.

Heading into the finale, we’ll only have 8 teams (4 in Dota 2, 4 in CS:GO) competing for their shot at glory. While the Dota 2 division has clear favorites and underdogs, the CS:GO division is a lot closer and difficult to call.

Since many might not be familiar with these teams, and their playstyle as showcased in the regular season, we're giving you a short preview of what to expect from these teams at the LAN event that's due to unfold over the weekend starting tomorrow!

There's clear gulf in achievements and general prowess in Dota 2 among the teams attending the event. ROG Titans and Signify are still a step ahead of the rest of the playing cast. In fact, neither team has lost a matchup to any of the other teams in league play.

Here’s a look at the teams. 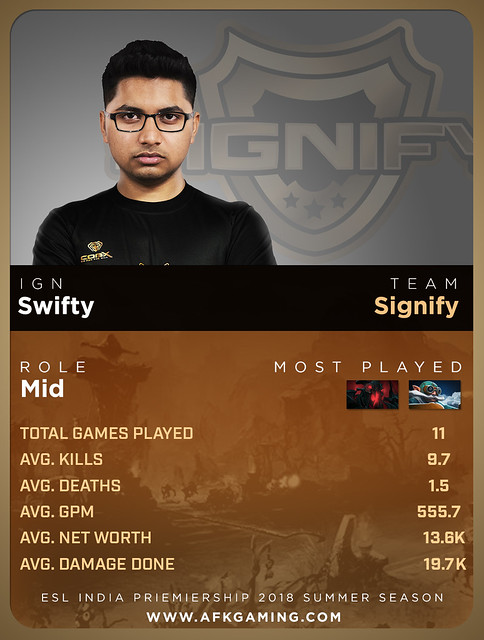 Ask any ardent Indian Dota 2 fan, they’ll say that Signify is the de facto best team in the scene. And it's hard to disagree! The team has been simply superb in local and South Asian events. The fact that they’ve never lost an Indian LAN event that they’ve entered, only adds to their repertoire.

While they did suffer a loss in the Master League to ROG TiTans, we still think that they’re the favorites heading into this event. Anything but a championship win would be a letdown for their fans.

Strengths: Their sheer versatility. Signify are able to run a number of strategies comfortably, thanks to their large hero pool and their role versatility. We've seen a number of games in which Swifty shifts to the 1 position while BlizzarD takes a back seat and the vice versa. This will give them an edge in drafts.

Weakness: They’re quite vulnerable to getting over-confident and making the occassional bad decisions. While they’ve rectified that in quite a lot in recent tournaments, we saw glimpses of this in the only game they lost against ROG TiTans. Add to this, their morale might be shaken following their unsuccessful attempts to qualify for a DPC event with their last opportunity for the season slipping away after their defeats at the TI 8 SEA Open Qualifiers. 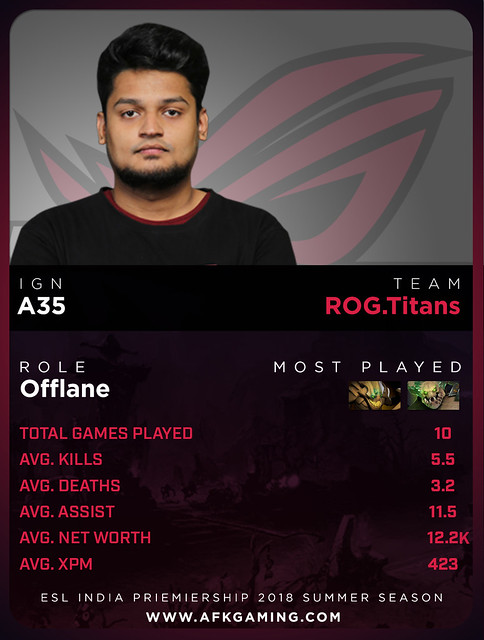 Much like their namesake, ROG TiTans have truly been the titans of the ESL India Premiership 2018, not dropping a single game during the course of the season. The team with a mixture of the young mechanically skilled players like ZxC coupled with the experience that veterans of the Indian Scene ZeDisBuGG and A35 bring to the table have lead ROG TiTans to an undefeated summer season so far.

Will they be able to further this winstreak at the LAN Finale?

Strengths: ZxC. Last year, Veewake and I said that this guy was the future of Indian Dota. He has managed to live up to the expectations. The young player boasts a KDA of 20.22 across 10 games. For context, the next highest KDA is Swifty’s 13.8. He also has an average death score of 0.9 which means that he doesn’t record a single death in the majority of his matches.

Akshay “ZxC” Dhodi is the X-Factor for this ROG TiTans squad, and is their key for triumphing in this LAN

Weakness: However that might be their downfall as well. The team prefers to let ZxC take the driver’s seat and build their game around him. This exposes both their midlaner, Archmage and their offlaner, A35 to getting repeatedly picked off and getting shut down. This leaves ZxC to do the bulk of the heavy lifting. 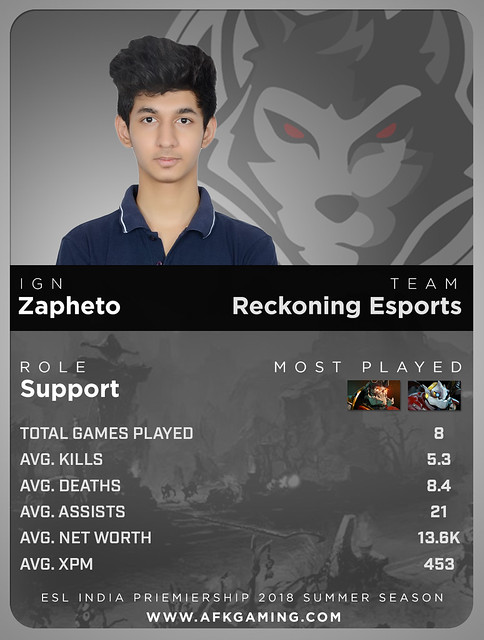 Reckoning Esports has been an upcoming team who has shown plenty of promise in a variety of local tournaments. They will finally get a chance to showcase their skills at a big Indian LAN event like this ESL India Premiership 2018 - Summer LAN Finale.

They’ve done pretty well in the Master League so far, but they will need to step it up by quite a lot if they’re to go head-to-head against teams like Signify and ROG TiTans.

Strengths: The strength of their carry DoT. He’s been consistent even when the team is under immense pressure, carving out wins out of nothing thanks to his performances in the carry role. His farming patterns and prowess are one of the best in the country. Reckoning esports will need to rely on him to carry through the two favorites.

Weakness: Their shot calling in the Ultra-Late game scenarios. They’ve struggled to close out games once it gets past the 40 Minutes+ stage. Their decision making in the 1 hour+ match against The Council was a pretty clear indicator of this. But they might have improved in this regard in the 2 months since that instance. We’ll find out at the LAN finale. 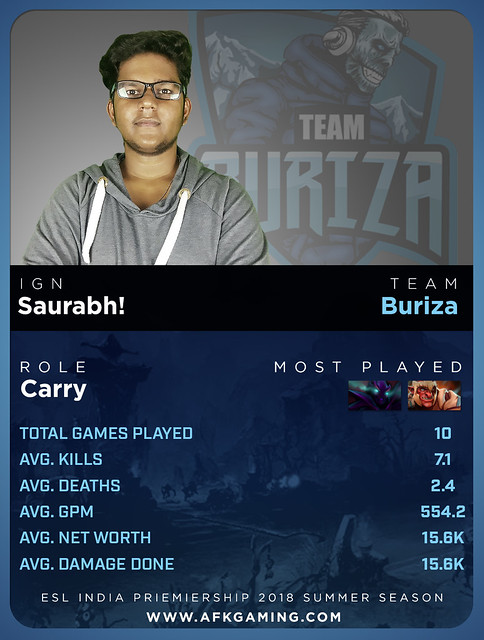 Team Buriza is just a team that works as a unit. Individually their players aren’t as good as Signify’s or ROG TiTans’ but as a team, they can stand up to them and go against them toe-to-toe. We saw glimpses of this in the ESL India Premiership 2018 - Master League, especially in their matches against ATE Gaming and Team Akatsuki.

Strengths: Like we said, their team synergy. They work so well together and are always ready to group up and make plays across the map.

Weakness: Their inability to come back from big deficits. The problem with having no standout player is that they don’t have someone who can reach down to the depths and carry them towards a comeback. This might cost them against their opponents that excel in the early phases of the game at the LAN finale.

The CS:GO side of matches are a lot harder to call. Brutality, Team Invictus, Entity Gaming, and 2ez Gaming are all very capable of taking the LAN event. They've all showcased brilliance in several matches across the season.

Here's a look at the teams.


Last year, if you would have asked us if Brutality would win, we would have probably said no, as other teams looked stronger. This time, however, Brutality is set to reclaim their status as a legendary team. With the addition of Ayush ‘astaRR’ Deora, the #1 player in the country, Brutality practically have a tactical nuke in their arsenal. They placed first in the online stage.

The only team who could threaten their streak is Entity, that Brutality, unfortunately, fought on Inferno, which happens to be their strong map as well; and an upset loss against SRA. No doubt Inferno is Brutality’s strongest map, it, however, happens to be the most commonly played map, and is not a specialist map. That means, they better be very good on Inferno, because their opponents are certainly not weak there, and might have a wider map pool.


This team looks particularly strong. Despite having no sponsors or a stable salary, the team is bound by a bunch of people who simply love the game a lot. That is exactly why they are successful, no fear, nothing to lose, just lots of trophies to win. Their map pool spans not just regular maps like Dust2, Mirage, Inferno, Cache, but also has specialist maps like Overpass and Train.

This is indeed scary because out drafting them is out of the option. Invictus boasts of some of the sharpest aimers of the country. Despite a second place finish in the online phase, their loss against 2ez was in part due to technical difficulties. The chink in their armour is almost non existent.


Last time, 2ez Gaming finished second, losing only to Entity Gaming in the finals. This time, they will be looking to go all the way through. However, inconsistency plagues this line-up. Losses to SRA and ATE was definitely was not something they were expecting, and their win against Invictus was also a stroke of luck. They ended up losing 5 out of 3 games on Inferno, which means other teams like Brutality and Invictus will surely be looking to use that on them. 2ez won’t be having an easy time if they do not bring unpredictability to the table.

Last year, they had a stellar performance, because they came seemingly out of nowhere, and not many people had heard of them before their breakout, i.e. their opponents had not specifically studied their play-style in-depth. Now that people know what 2ez can do, they will do everything in their power to counter them. 2ez better have some tricks up their sleeves.


Surprisingly, the defending champions of last year barely scraped into the LAN finale this time. Thanks to the help of 2ez, Entity mustered enough points to make it into the top 4. The team seemed vulnerable during the online phase, especially with losses against Intencity Pune5 and Portal Esports. Will they be able to turn things around, knowing that they are beasts on LAN?

With one of the best IGLs of India, HellrangeR, and one of the finest coaches filling in every chink in their armor, Entity is on the road to redemption. They have a very diverse map pool with numerous strategies that they would probably have saved for the LAN because we did not see those in the online phase.  Like we mentioned before, a line-up change is most likely in store for this team after the LAN finale as Marzil plans to join OpTic Gaming India. How will this fact affect the team morale?