A Blast from the Past - In conversation with Remstar

11th, Feb, 2018
Remstar’s Crusaders haven’t had the best of seasons at U Cypher but that didn’t stop the man from speaking his mind. One of the country’s top Dota players back in the days, Remstar was a natural choice for a captain. We speak to him about his teams performance, the entire experience and about his rapping in the music video *wink* !
1. Hi Atul. How have you been? Your last interview with AFK was about 3.5 years ago. How have things progressed since then? How often do you play/get to play dota? And how much do you still follow the scene here in India and abroad?

Hey Shounak, I am doing good man and yeah, it's been almost 4 years since I last gave my interview .. feels good to be back and do something that I love the most. Great to see the gaming industry in India go so much since the time I stopped playing , The number of events and the prize pool is insane , I do play dota almost everyday ( Don't think so I can stop playing the game :P ) and yes, I have been following the international / india dota scene all along, Specially Indian dota scene since it is full of masala and well who doesn't love a bit of masala :D 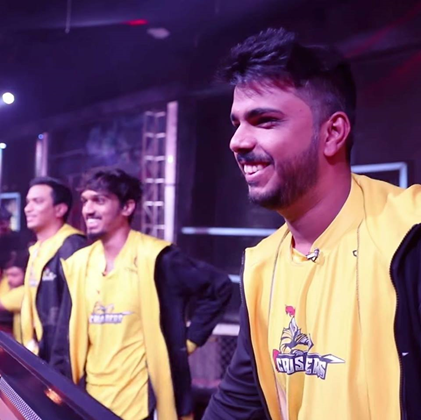 2. What were your initial reactions on being chosen as a captain? After 7 matches do you feel comfortable as a leader on screen while leading your boys?

Well when I was first approached by the Ucpyher team for the tournament , My instant reply was a YESSSS !! such a big opportunity to come back and compete once again, and with such a big platform, this was a no brainerr for me. Initially when I heard about the format, I did want to became a captain and lead the side, and when I was chosen as one of the captain, I was way to happy and excited. I did always regret leaving competitive gaming and somewhere behind in my mind, I wanted to come bank and play, and here it is , a golden chance for me. And yes, I feel really comfortable as a leader even tho our performance has been pathetic so far. But there is this amount of pressure that comes on you when your team is not performing. You have to face the criticism , People think that I am not doing anything for my team but that's not what exactly it is. It's a gaming tournament where skill is required to win games, But for my teams case, it's just pure badluck that we are facing
3. The Crusaders haven't been the best team in the league to put it lightly. Where do you think you guys have been lacking? If you could go back to the start of the season, would you change your composition of players or how you guys approached the games?

Oh we have been hands down the worst team in the league so far. A lot of people were disappointed by our performance so far because our team should have done much much better. Solo games have been a bane for us clearly ( winning just 1 out of 14 games so far). Ozzie has been trying but it doesn't matter if you are not winning games (not even 1 game) at the end of the day, clearly he doesn't know what is going on still :/ . Killerbee is practicing, but again cricket is a one over game and you gotta have nerves of steel to win the match ( he's a great guy btw :D , go watch his streams ) . Going into the team games everyday with 0-6 score is not a good feeling. Solo games have made the difference so far and to be honest I really feel helpless with the bad result. Cs guys have been playing excellent. Krish and Kavish leading from the front as expected from them , but the dota team is again choking, I expected to win a lot more matches but sadly we have been under performing. If I could have gone back to the start of the season, firstly I wouldn't have picked Osama for sure. And yes I wanted to pick Yodhas Dota IGL Rishabh,and I did put 2000points for him, Dunno what went wrong with wuzz and he put 2500 points for him ( I will hate wuzz forever for doing this to me) . I would keep the same CS and Dota side, just change the solo game players. Also I would go back and come up with a better team war cry, go go go crusaders sucks to be honest and peeche se aayenge , jeet ke gayenge was a disaster :/. Gotta hire Wuzz from yodhas to write some kickass warcry for us. 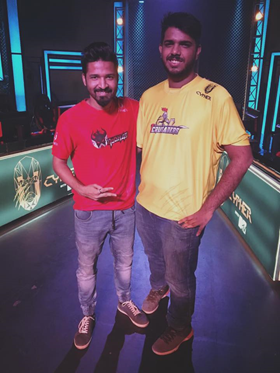 4. What do you like about the format of U Cypher? And what do you think could have been done better?

Format is really fun, you have to perform in all the games for a victory, so you have to be interested in the other games that you don't even play which is good and exciting . I think the format for a starter is excellent and won't really change anything towards it, you get to play every team twice in the league which makes the league pretty long and gives you a good chance to comeback or build your lead even further. If I had to change something, I would change and make cricket a 5 over game rather than a one over game. Currently if you make even one mistake in cricket, you pretty much lose the game.
5. What was the best part of being on set and meeting new people? Apart from people like Acrid and Cyberhen and all the older bunch of guys do you think you made any new friends?

Best part was the treatment we Gamers got, I have been playing since years and have been attending various events but some of the organizers don't even care about the comfort of the players. Every team had their own Vanity van man :D hahaha , But again Ucpyher were cooperative and we really felt comfortable during the shoots as well, and I did knew most of the players personally so it was amazing. We had a lot of fun off shoot hours, even if I didn't have my match I would still show up on the sets to chill with everyone. Made a lot of new friends too ( Almost everyone :P ) . Got to know the cs guys better. Waking up everyday early and going for our match, meeting and chilling with my team and the opponent team members was the best thing about Ucypher and I am missing that the most right now to be honest.
6. You also starred in the music video that U Cypher made? How was that like?

Hahaha shooting the music video was way awkward in the start to be honest, my team, as usual, was underperforming in the music video shoot as well but in the end, we got it right :P. It was obviously a new thing and to be honest I personally had fun shooting it. Up for more music videos man :D.Watching myself on MTV is so amazing man GG

7. How have your family and non gaming friends reacted to you being on MTV?

My family and friends are super excited about the show. they all follow and watch it regularly. It's just that they keep asking me the same question " Kab jeetega tu? " , few of them are way too curious to know "Kab jeetega Ozzie" . He has a lot of support for sure.
8. Thank you for taking the time out for this interview. We wish your team all the best in the upcoming games and hope you guys are able to make it through to the playoffs!